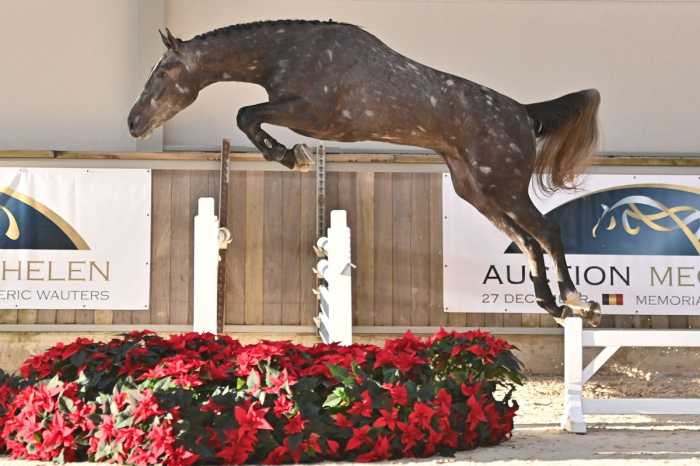 While the team of Auction Mechelen is preparing themselves for the 2021 edition, we would like to
take our time to look back on the previous editions and take a look at the future.

After a 15 years absence, in 2019, in addition to the well-known final of free jumping for 2-year-old
horses, an auction was linked to this competition for the first time. In 2020 we were forced to let
Auction Mechelen continue online only, and our collection was expanded with 3-year-old horses.

Auction Mechelen’s references are a maximum of 4 years old, but given their young age they can
already present an impressive list of achievements.

Auction topper of Auction Mechelen 2019, Requiem J&F Champblanc (Quaprice Du Bois
Margot X Calvaro Z), won the free jumping competition and was then sold to Hilton Stables in
Belgium. Requiem was approved for breeding at Studbook Zangersheide in 2020, and was
successfully released in the PAVO stallion competition by Maxime Tips. Requiem will continue his
future sports career under the saddle of Brent D’haese.

Ricardo Vd Veldbalie (Eldorado Vd Zeshoek X Thunder Vs Zuuthoeve) was sold to Ireland in
2019, where he was also approved in 2020. Ricardo is one of the most popular breeding stallions
of his year.

At the beginning of 2021 Rockstar V (Flamenco de Semilly X Cablo Z) was one of the
trendsetters at the auction of the Westphalian Studbook, and will continue his sporting career in
America.

Last but not least, Crispello V.V.Z (Colman X Cornet Obolensky) left Belgium for Hungary and
was also approved as a breeding stallion over there.

In 2022 Auction Mechelen’s oldest references will be 5 years old, and expectations in the
international circuit for young horses are high.

Niels Bruynseels spoke the following words last year: Promising jumping talent or reliable
amateur horse, our selected horses have everything to make their new owners happy. We
personally guarantee that. We’re convinced that the Auction Mechelen team has successfully
achieved this goal.

The collection of Auction Mechelen 2021 also looks fascinating to say the least. Keep an eye on
our website and social media for further information!